I decided to spend some more time to create low poly art for the game. Even though it is in early stage of development and a lot is yet to be created in terms of game mechanics I figure that having semi nice visuals will help raise awareness of the game.

I ended up creating no less than 136 unique low poly trees and now I don't want to model a single additional tree for quite some time! =)

In this video all 136 trees can be seen - there is in fact exactly one instance of each tree in the video. If you wait for a lap you can also see what the trees look like when autumn color scheme is applied.

The shader that I created in Amplify Shader Editor (see my previous devlog entry) supports dynamic change of summer/autumn color as well as snow coverage on any polygon that is facing upwards. In this first animated gif I'm modifying the material property "Autumn" animating it from 0 to 1 over the course of 2 seconds. I won't need real time animation for the game but I thought it was a neat feature nevertheless.

Similarly there is a property slider for snow coverage. The shader looks for any face which normal is facing upwards and then crossfades the color value to white. As the slider moves from 0 to 1 the shader will exponentially increase the value for faces that are not directly facing up to allow the snow to cover more on sloping parts of the tree. Again, I won't be needing to animate this in real time but it works whether you want to or not =)

I also added the view above in a separate video if you want to analyze it in more detail.

The asset developer side of me is insisting that I need to showcase the assets, probably a lot more than I should allocate time towards, but I think that the OCD-part of me forced me to line up the trees perfectly and create a video that showcases them one final time before pushing on with the game =) So, here goes:

That's Racing is the first serious attempt at making a game since I don't know for how long (probably 5+ years) and I have no clue if this will be economically viable in the end. Maybe I am pouring hours into making this game and if it doesn't monetize well I will have worked for way below minimum wage. The benefit of making these assets, however, is that I could bundle them up and sell them if the game fails. Saying that, I will do my very best at making this a successful game =) It's a good thing I enjoy making this stuff because if I end up making hardly any money from it at all, at least I am having an amazingly fun and creative time making it.

Today I also modeled a lowpoly windmill. Well, I say low poly but it's probably built using more polygons than necessary since the wings of the windmill are made up out of individual wood sticks rather than using a normal mapped texture to achieve the look of the wing. I may change it later on if performance becomes an issue. I think the polygons will start adding up for the real time shadows soon so I will need to do some profiling in Unity to check what sort of performance hit this level of detail causes.

Here's a view of the windmill in Blender: 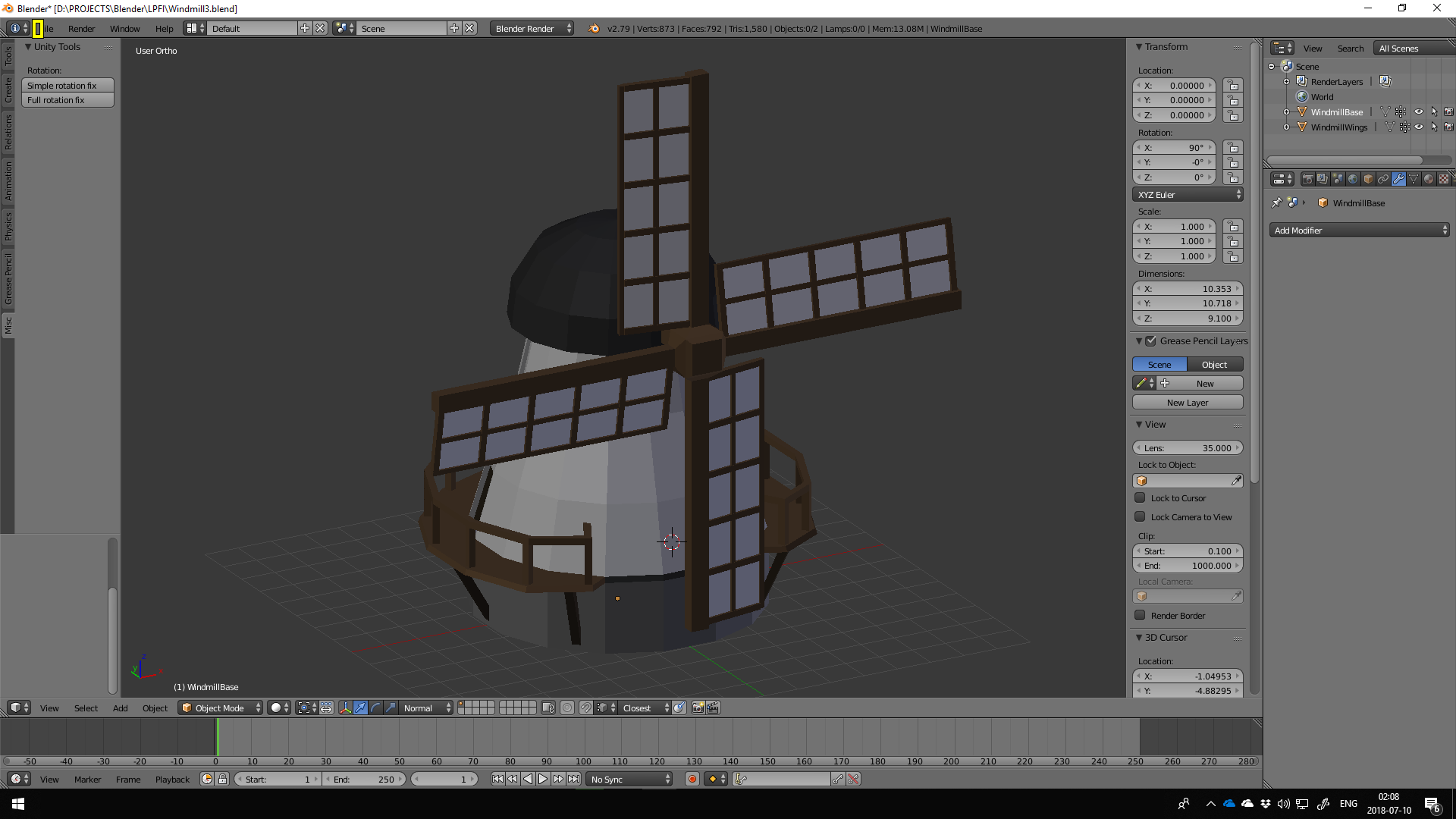 Finally, here's the windmill in the game. Someone please take the driver's license of this guy!